From mid-2017 to late 2021, I wasn't living in California. I wasn't living in Virginia either. I was actually living about an hour outside of Delhi, India in a satellite city called Gurugram. Now that we've gotten settled in Southern California, it's time to share a little bit more about my experience. I was very intensionally quiet about it on Twitter and this site to protect our privacy during a sensitive immigration process.

You may have seen on other parts of my site that I met somebody special back in 2016 on a vacation around North India. We kept in touch, fell in love, got engaged, and got married back in winter 2017.

Our original intension was to be there about 9 months to a year to process my wife's green card application, at the time, this was roughly the duration of the process if you didn't encounter any issues. But very quickly in the process, we encountered issues, USCIS is not a very fun part of the government to interface with, and we quickly found India's immigration backlogs were especially slow due to the volume of cases at the embassies.

We were getting pretty close to the end of the process in early 2020, so to celebrate, we planned some international trips. I wasn't actually allowed to stay in India over 6 months at a time, so I needed to exit the country to reset the counter. We first headed to Thailand right as the news about covid started to spread. We arrived to an empty city, empty hotels, empty malls. Overall it was a lot of fun to visit. But things started to get more odd on the flight back to India - the plane had about 20 passengers on it. We arrived and headed back to our apartment - the next day, entries for foreigners were suspended, and thankfully this didn't split us apart.

I was in India with my wife as the lockdowns began, which pretty much slammed the brakes on the entire immigration system. It was heartbreaking - we were very close to the end. We survived the next several months until the immigration process resumed. We then hit our next roadblock, a very unique delay that prevented our application from progressing for an entire year. When I got that news, I threw my phone so hard at the floor I destroyed it. Weirdly, AppleCare gave me a new one for free.

Thankfully, things started to look up for us in 2021. We were hoping to make our move in the summer, but hit another roadblock which pushed us back to later in the year. We were able to take advantage of domestic tourism reopening in India with a few small vacations which helped pass the time.

In November, we finally were able to book my wife's visa appointment in Mumbai. She went in, without me (for real - they instituted a short term policy disallowing sponsors from joining applications one month before), and came out crying. I didn't expect good news but was prepared for more delays. She showed me her approval letter. We celebrated a little, bought plane tickets for the next week, tried to pack our boxes as soon as we could, and literally left in the middle of the night.

It feels good to be resettled back in California. The past few years have been really tough it's nice to be able to relax in a home we can plan to stay in longer. My wife is adjusting to her new life here and preparing for her design career. And of course, we'll be back to visit India at some point in the future.

How can a foreigner get married in India?

India legally has a "Special Marriage Act" which allows Indian citizens to marry a foreigner. It's similar to a court marriage. The process takes about 3 months. Both the bridge/groom must be residing in the district they wish to marry in for 30 days (this part is tough without family support, but I think a hotel would work). Then the paperwork begins. The foreigner must provide a non-objection certificate from their embassy stating their government doesn't object to their marriage. It took me 3 tries to get this right, Indian paperwork requires proof of permanent addresses, which is not a concept American documents readily provide. Once your paperwork is good, the courthouse must publicly advertise your marriage to ensure there's no objections. The only valid objections the public can pose are that the bride and groom are related or that one is already married, but there's no appetite for simplifying this part of the process. Finally, you both must appear for a small ceremony with the judge (ours did our vows in English) and you're issued a digital marriage certificate.

The process differs just a little bit with every courthouse, but the required steps will not. Once you're married, getting a lease in India is easier, and the foreigner can go back to their home country to convert their tourist visa to an Entry (X) visa, which demonstrates to immigration officials that you have a reason for being in India so often. Remember to carry your marriage certificate with you whenever you enter/exit as it quickly resolves their confusion.

Of course, you should plan for a Western and Indian ceremony after you get your marriage certificate. My advise to you - don't waste time looking at marriage venues or hotels. Find a nice "farmhouse" on AirBnB. Coordinate with the owner a little about the ceremony and you'll find they'll often be pretty accommodating.

How do you apply for a Green Card for your foreign spouse?

Once you have your legal marriage certificate in hand, you can begin the application process. I'd recommend going with a company like Boundless who streamline the paperwork and hold your hand a little in making sure you file correctly, but aren't involved and expensive as a lawyer after your paperwork is in.

Start to apply the moment you receive your marriage certificate, and make sure you hold on to all your relationship momentos. Take lots of photos together, on vacations, with friends and family. These all help at the end of the process.

It's not necessary for the applicant to live in the same country as their spouse but prepare to justify that very strongly. The embassy officers who process visas are more than aware of the freedom available to those working remote. Not visiting at all during the process could very well result in a denied visa at the end. If you do choose to live in the same country as the applicant, make sure you maintain domicile in USA with a remote job, active bank accounts, health insurance, working mailbox, and regular visits to demonstrate you can quickly relocate after visa is approved.

I ran a visa support group on Telegram with about 1000 people in the same visa category as my wife. I learned that many aspects of receiving a marriage-based green card are specific to the applicants country. For example, in India getting the police certificate is a massive pain, the embassy scrutinizes applicants who are medical doctors, couples in arranged marriages need to be much more rigid about the amount of wedding specific proof provided, and couples in love marriages need to be prepared to explain the families support or lack of support of the marriage. If you're applying for somebody in India, I recommend tracking that telegram group down as it still exists and provides a level of support no lawyer ever will.

It's difficult to live in India as a foreigner. To start, you can't legally reside there. I was never more than a visitor. I was never eligible for something as small as a bank account or a sim card. We were able to use my wife's paperwork for all these things. Indian visas for US citizens are the most generous and allow for stays of up to 180 days. There's a special visa that spouses of Indian citizens need to get called an Entry (X) visa. It doesn't grant additional rights or residency but better explains long/repeated visas to immigration staff and was allowed entry during covid when the tourist visa didn't. Whatever you hear or see online, don't overstay 180 days even on an entry visa. Leave and come back. If you screw up, you're not going to be able to see your spouse for a long time. If you can get OCI approved, you get a few more rights, but some unclear taxation rules begin to apply after 180 days that I'd be afraid to interact with. Note that you'll need to be in your home country for the duration of the OCI application which could take many months.

The only real (small) expat communities are in Delhi, Mumbai, and Bangalore. You're not going to be living in the same place as them because the other expats have their embassies or companies arrange their apartments in specific communities. During Covid, most of the expats went back home. After that, the only white people I saw were diplomats and their staff! 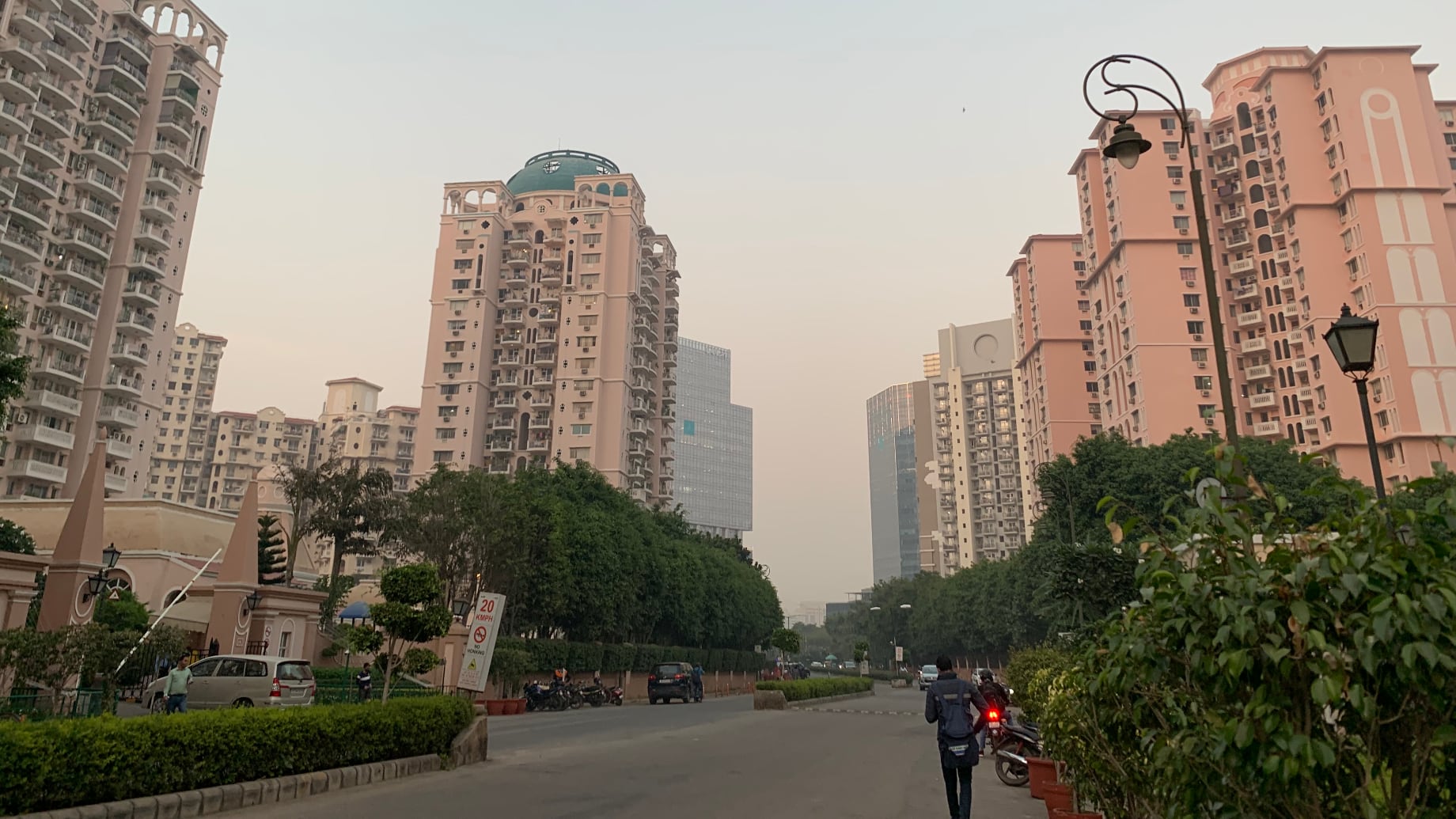 We were living in a tower in a secured community. These aren't super common in India. It's probably closer to how you'd imagine a tower in a Chinese city, but more spacious. We had almost every appliance a western home would, minus a dishwasher and oven. Our internet was 300mbps fiber. 1gbps was an option, but we didn't need it. India's mobile data is well known for being reasonably priced, and it's easy to get a 100gb/month hotspot plan.

India has a lot of import restrictions so it's tough to find many products you're familiar with. When I first arrived, finishing Hershey chocolates was a challenge. Towards the end, that began to change and I stared seeing Hershey's chocolates in more shops. I both brought lots from visits to USA in my suitcases (big pelican cases) and ordered packages through my virtual mailbox who made them smaller and helped with customs paperwork. UPS ended up being the best way to ship things, USPS/India Post are not the best choice.

Traveling between Indian cities is easy. The airports and several airlines on par or better than western airlines, and airfare is very reasonable. Finding comfortable hotels around the country is easy, just open your Marriott app and see. Taj, Oberoi, Leela, Lalit hotels are all fantastic Indian brands.

Culturally, Indian cities are pretty straightforward. Don't point your feet at people. Don't wear your shoes around people's houses. Pants are generally more appropriate than shorts. No PDA. Many people are vegetarian and are not comfortable around meat. Respect the local religious customs, realizing that the way some westerners behave around Indian religious places pretending to be super pious looks like mocking. Small talk is not common. Outside the cities people tend to be very conservative, so discuss how to behave with whichever Indian you are closest to.