I know I don't write much here these days. My life has been interesting recently but I usually just tweet and call it a day. But early Tuesday morning, on a rural stretch of highway between Charlottesville and Lynchburg, Virginia, somebody tried to kill me. 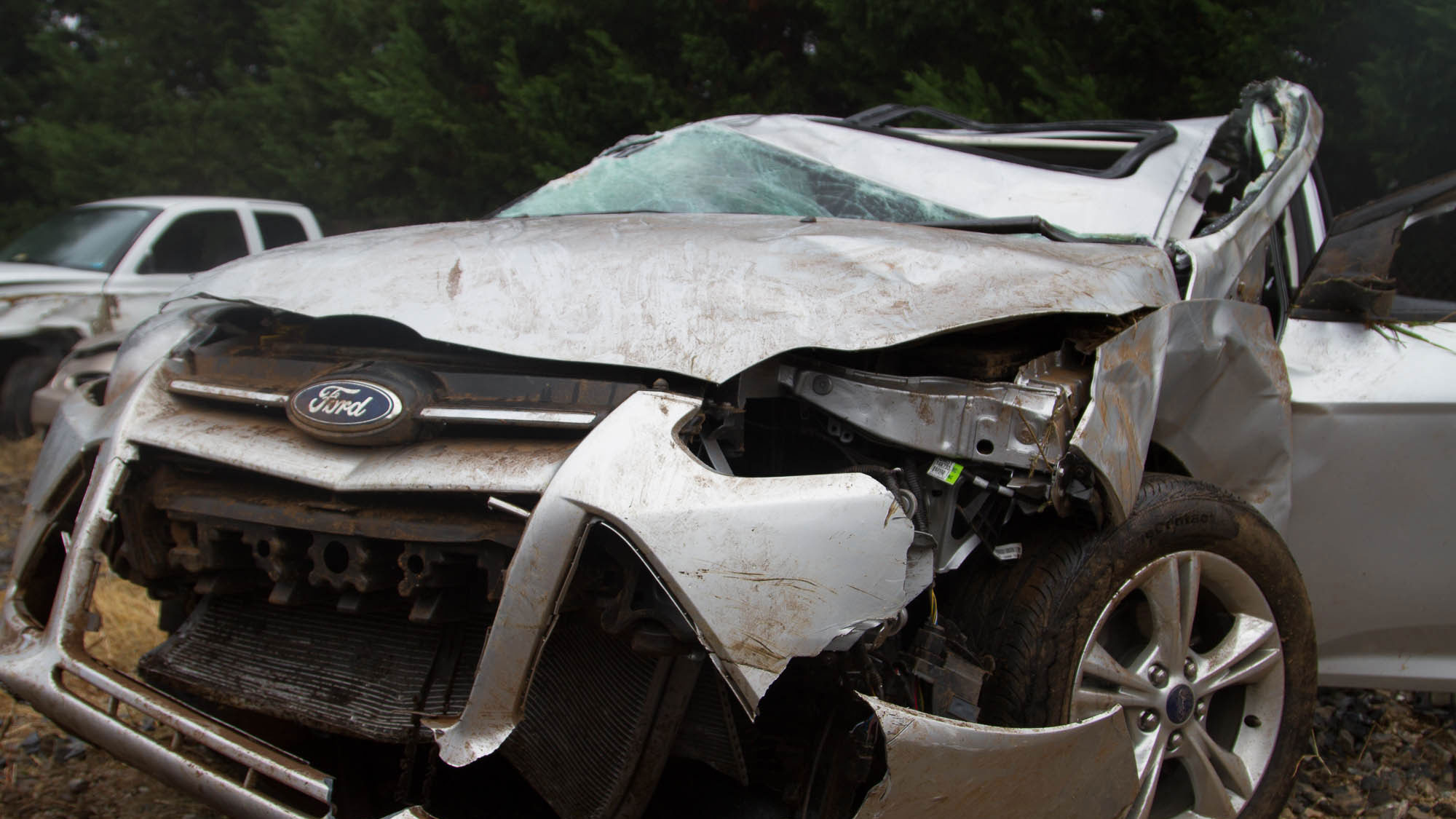 Let me start with some background. I recently purchased a car that got crazy good gas milage. More than twice what the explorer got. So I've been driving just for the fun of it lately. I recently drove it on a 3,300 mile trip to Nova Scotia. It was a long time on the road! So my scheme for this past weekend was to head to San Diego for a friends wedding, and I really wanted to give Virgin America a whirl. I'm a brat. I know. So I had to drive to DC to get on the plane. 3 hour drive north, not really a big deal for me. So I got back a little later than expected and was anticipating arriving home at about 2:45am. It was a foggy mess and I felt sick, but I just wanted to get to bed, so I just tried to not think about it.

Slightly south of Charlottesville, the car in front of me pulled off to the left and started to slow down a lot. They didn't use their turn signal and there wasn't a turn to be made, so it looked strange. He then got behind me. On these types of roads, deer and bears are quite common so when people get tired, getting behind another car is wise because you don't have to spend as much energy watching for animals trying to cross the road. This guy stuck behind me for roughly 5 miles, and he was pretty close behind me, which was strange and I started to notice a bit of aggression.

So I finally get behind a truck I want to pass. He jolts into the right lane with me. I was starting to get scared then. I pass the truck, get back into the left lane. He quickly fills the tiny amount of space between the truck and I. The truck honks. I knew he was following me now. I stumble for my phone, and call 911 and tell the officer on the line. They half help me, and hang up. He's still following me really close. I get a call from the police a few minutes later, where we tried to coordinate meeting up somewhere. I was a few miles north of where we planned to meet and thought it was much closer than it was. 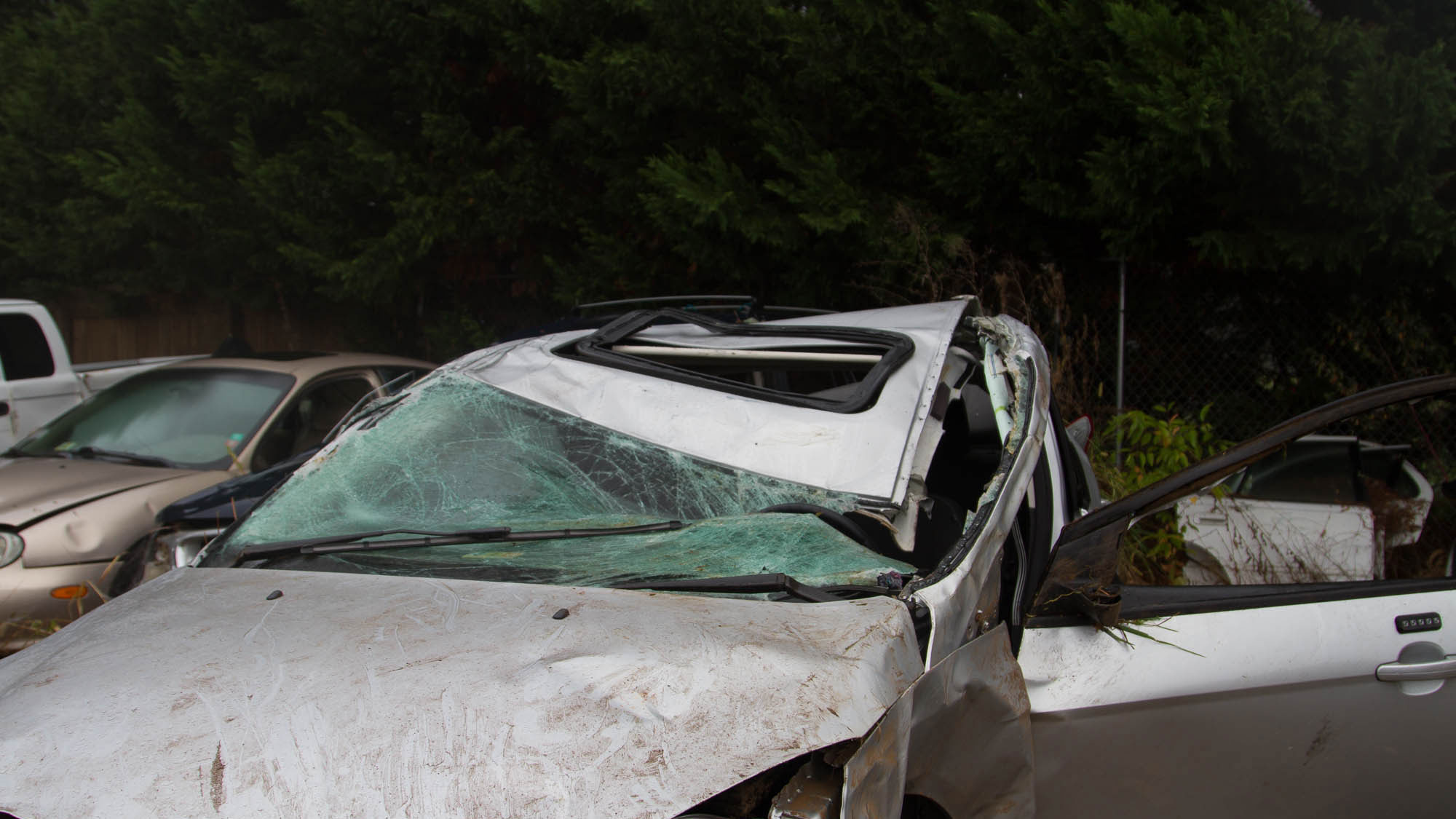 Now the car is following me close. I can't even see his headlights. This is a rural road with no other cars, why is he following me, I thought? I was shaking. I tried to call 911 again, but could only get 91911 in my phone. I remembered that. Things started to get dicey when I tried accelerating to see if he'd back off. He didn't. He gets beside me like he wants to pass me. Phew, I thought. He's just angry. I thought it was over. So I slowed down a little to see if he's speed off. He didn't. He slowed down too. Then I tried speeding up a bit. He did too. I completely expected him to open his window and shoot me now. I was ready for it.

I tried to accelerate past him, and he dashes past me and gets in front of me. I tried switching lanes but he was watching me, and didn't let me go past. Somehow I tried again to get past him, and was going 70-90mph at the time on a curvy part of the road so I didn't push it. At some point then, he rammed me off the road. And sped off. My car runs towards the side, flips once or twice. I can't remember. I only remember being on the edge of the road asking God to spare me. When the car was upside down for a split second, I was thinking that when I would land an instant later, I would be dead. 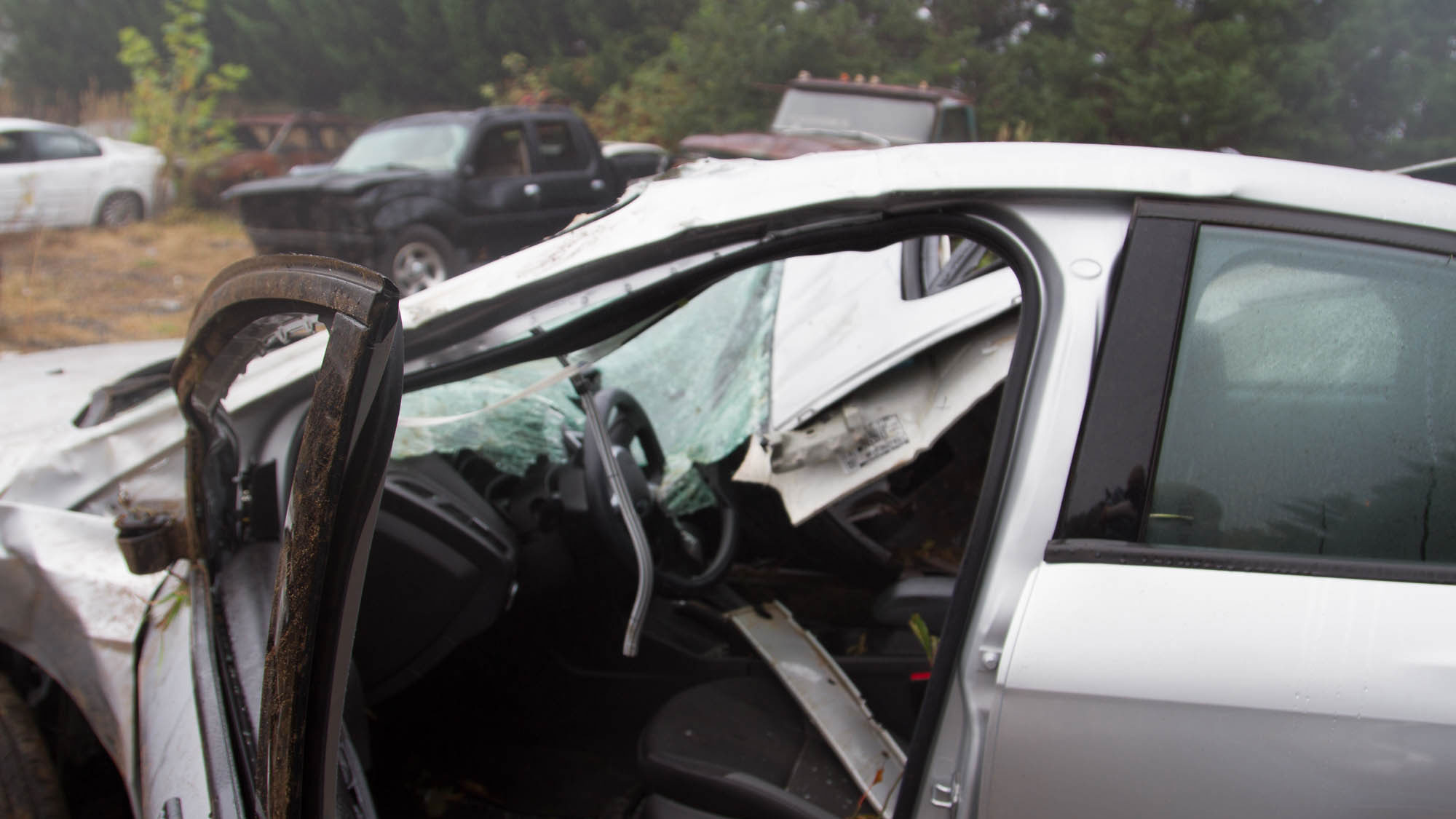 I wasn't. I was sitting still. However fast I was going to still in an instant. No brakes. I was right side up. I just remember audibly saying "Thank you, God." A few seconds later, I then was haunted again thinking he would come back with a gun to finish me. My car didn't deploy the airbags, but managed to call 911 for me. I can't remember a word we said. They had no idea where I was. Neither did I. Thankfully another family came up and called 911 for me. They said hi and we talked. They were really shocked I was talking. The first thing I did was ask them to take a picture with my camera and all. Then I tried to make some phone calls. It was 2am, and I was a little out of it. They all looked at me funny when I told them that I was pushed off the road. They then casually mentioned another car being off the side of the road, and I got scared again. I told them that he was dangerous. I then remember trying to get out of the car to hide in the woods from him. They told me to sit still, and I asked them if they had a gun in case he tried to come after us. They again gave me a funny look.

A few minutes later, the police arrive. They walk past with a short black man in a blue striped shirt. I don't know if it was the guy or somebody else he rammed off the road. They kept mentioning mental disorders. Oddly, the police officer knowing I was fully conscious and talking, never asked me what happened. Weird.

The ambulance arrived and they made me crawl out of the car. But then they suddenly decided to treat me like I had a neck injury, and wouldn't let me take images of my car despite the fact I walked to the backboard. They strapped me down and I spent the next 45 minutes on the longest ambulance ride I could have expected. I walked out of the hospital at 7am with a broken hand and a few scratches. 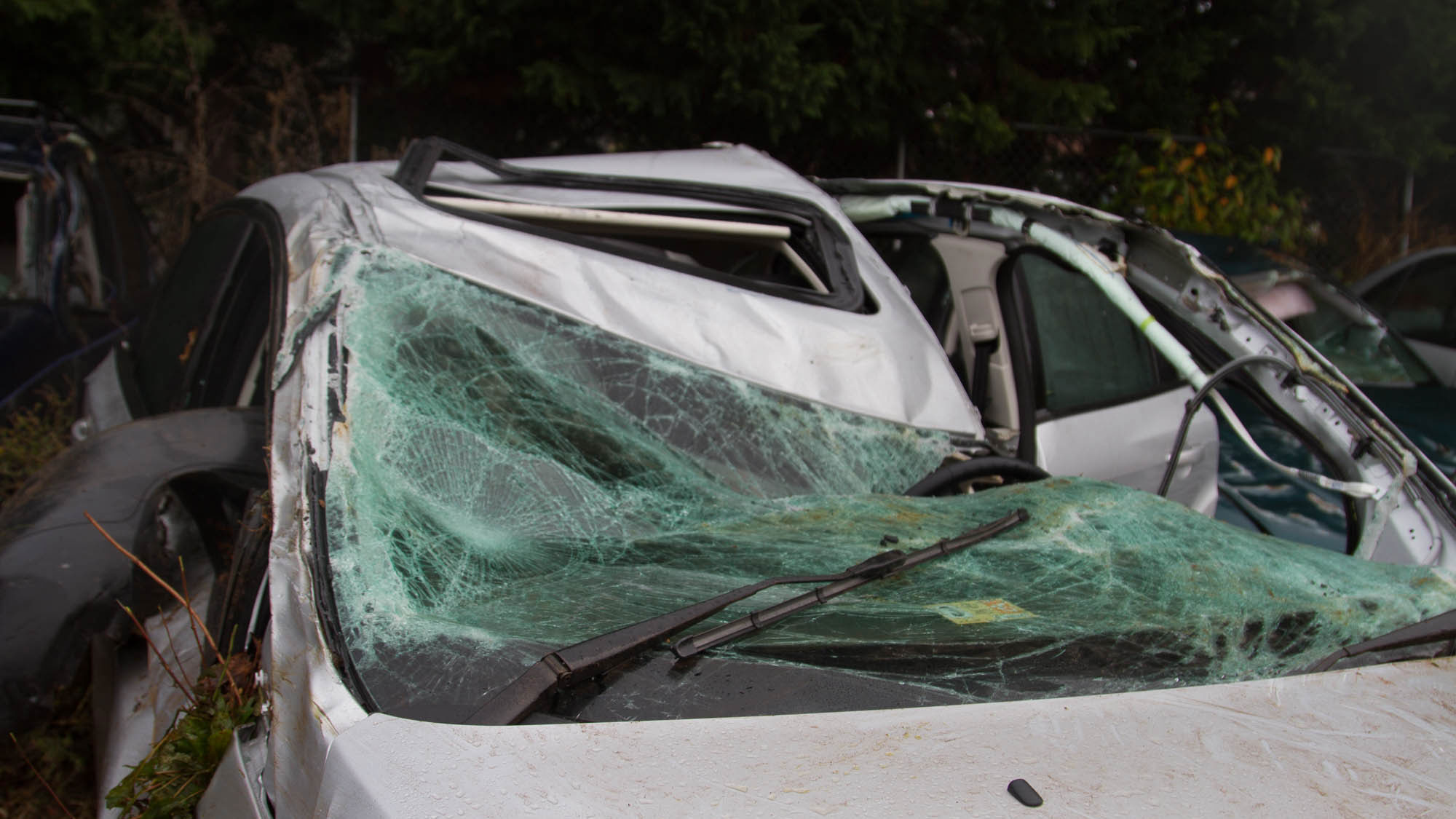 The next part of this is very spiritual, and if you're not into that sort of thing, you're probably going to write me off for this next part. I quite frankly don't care if you do. Just skip it if you don't care.

God saved my life - in the literal sense - that night. Simple physics and chance say I should absolutely dead right now. You can see the pictures. Thankfully the roll cage was stiff enough to take whatever happened. The only inference I could make as my friend and I looked upon the carcass of a car in the lot was that my steering wheel broke when the car smashed into the ground. If my hands were over the wheel and not under, I expect I wouldn't have any.

I have heard stories of this kind of crap happening in India and Nepal. People getting into these crazy situations. I believe that somebody was trying to kill me for a reason (They kept saying mental episode... we often call those a disorder in the west, but his ability to drive - coherently aggressively -- seems to refute this). I know this because of a circumstance my friends were in Nepal when they were chased by people trying to kill them. As many of you know, I run a little ministry with some friends called Illuminate Nations. A lot of weird things have happened to us this past year. Great discouragement to average people, but we believe that there is an enemy who would quite frankly be happier if we all were dead. 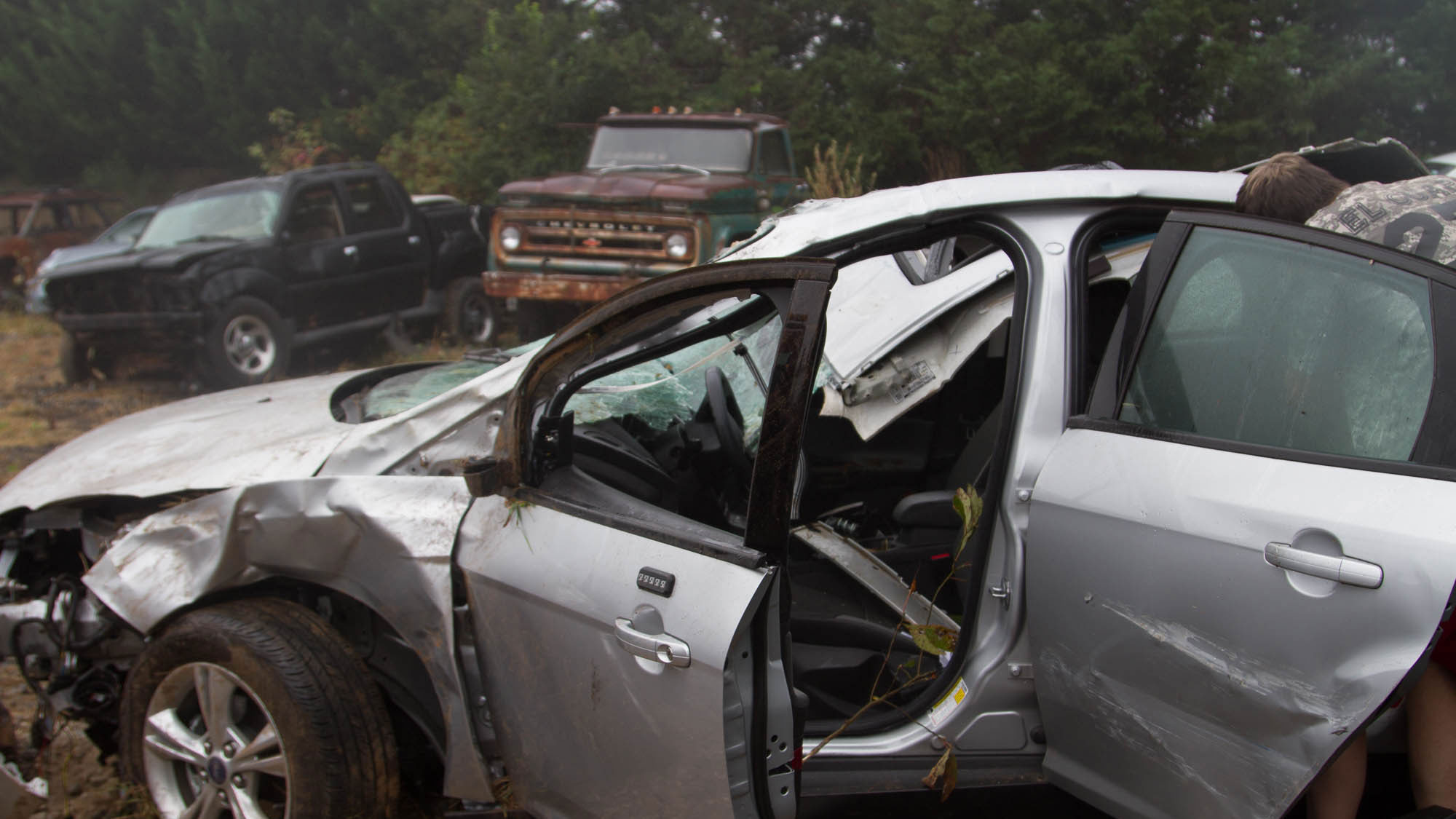 All this goes to show two things. Spirtual warfare is quite real, quite violent, and quite serious. And two. That God can be glorified in the most insane situations. Because He was Tuesday night.

Update, June 2015:
Since the accident, my hand has healed and a new car was basically given to me. All charges against the man were dropped as authorities did not believe the story enough to even call me or ask me details