Two weeks ago, my friend texts me a link to a Craigslist boat in a Roanoke listing. His comment was simple. "We need this." It was listed at $450. Here's was the attached picture: 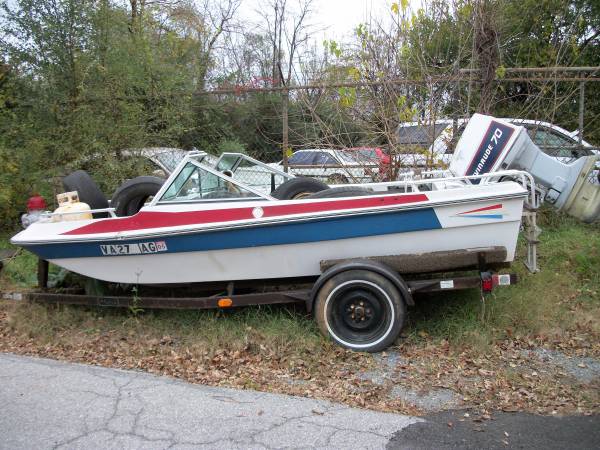 Two weeks later, we drive down to Roanoke after work. Into a weird industrial part, with a rail yard and what sounded like a dozen angry guard dogs. Including one which sounded like it was dying. The perfect location. Our beloved boat listing stood before us. A clearly forgotten vessel waiting to be loved again. It was rotting, full of soil and old tires, and pretty much exactly what we expected. The guy who was trying to sell it to us was nowhere to be found for a few minutes, but he eventually came out.

He came outside and tried to pitch the boat to us. It couldn't have been too hard of a sell, we were two young guys snickering at the boat and it was sitting in a junkyard. We just wanted to make sure the cylinders weren't frozen. So we hooked up the starter and the guy who was selling the boat sprayed some carb cleaner into a not-air-intake part of the engine (??) and it spun a little! With that, we decided to buy the boat. The steering was entirely frozen. So we paid $400.

After we bought the boat, we realized the trailer wiring was not working and there were no lightbulbs. So we replaced those. $20 on the boat as soon as buying it! We also went through 2 cans of Fix-a-Flat with the entirely depleted tire. After some drama with the trailer tongue connector piece involving a dead drill and a Dremel, we were able to hook up our hot mess of a ship to the car and head out. For the first time in either 2 or 12 years (we really know nothing about this boat), we head out.

We decide to celebrate accomplishing our goal of buying a boat by going to Sheetz to get some deep fried foods, and to air up the tires better. We get the tires inflated, only to find the previously Fix-a-Flat'd tire has gaping holes and cracks that we tried to patch to no avail. We figured upon losing some pressure, it'd be okay again. Which was true, for a few minutes. About 5 miles down the road, and after checking the tire a few times, we thought it would be okay to continue the 40 mile drive back home on pitch-black 460. It was good fun. Until I look out the window and the tire is completely flat. So we pull off at a closed down gas station and I quickly burn through 9 dollars more of Fix-a-Flat. The tire lets it out pretty quickly but looks not totally flat, so after much contemplation and a rejected plea for help from AAA, we continue on still. We have work the next day after all.

I look back 10 minutes later and the tire is once again gone. So we pull off at gas station number 3 and my friend sees the reflection of the tire in the mirror, and sees that with motion, it lifts up a little bit. Ambitiously, we called it okay, and turned back onto 460. In what seems like the cruelest twist of irony, we turn a little hard and he says "We probably shouldn't turn like that with that tire!". Fate, being cruel to us that night, had me look in the mirror a mile later at a tire barely even touching the wheel. We pulled off again, knowing there was likely nothing we could do with the trailer at that point. The sidewall of the tire had exploded off and was laying on the highway somewhere. So we did what any Virginians would do in this situation. Left our boat on the side of the highway, missing a tire and precariously sitting on a half-tilted jack, and drove away into the night.

The next day, we drove back to our boat with a new tire on the rim and re-installed it. We trailed back up, still 30 miles away from home, and got it back to it's new home (my friends backyard) with no new drama. Perfection! We knew at this point, the trailer probably was most of the value of our purchase.

Now being Saturday, we got to pour some time into our ship, which I've cleverly named "Hot Mess". We began work on hosing it out, trying to get the soil and disgusting carpets into the trash can. We tore out a lot of old wood, a bunch of cross foam, a bunch more rotting wood, and the seats. At this point, the floor has begun collapsing in (it was just fiberglassed plywood, which was never treated, so that's not a good thing to build boats with). We were okay with that. Our "cleaner" boat was starting to look like a canvas with potential.

As evening sprung upon us, we knew we had to do one big thing to see if this boat was worth any more money. We had to see if the engine would do anything. We figured out the flywheel had hooks for rope starts the night before, so we could start the boat with just a rope and a stick if we could figure out how to get fuel into the motor. The boat didn't come with a gas tank. The old fuel line worked, but the pressurization bulb was quite stuck. We contemplated for quite a bit if we should throw money at the problem or just clean out the old line. I blurted out something about Carb Cleaner and we saved $2, and the old fuel line. We hooked up the line from a gas tank to the engine and pressurized it. We then prepped the engine to try to get it started...

Our first start was with the choke on. This engine was ancient (35 years old) and we had no idea if the spark plugs were even working. But instead of fretting, we just tried to start it once. My friend pulls the cord, and the first thing we hear is a tiny little sputter. Woah! We prime the fuel line a few more times and pull again. 5 sputters! And some exhaust rises! It was a thrill. But the engine still wasn't keeping running. So we turned off the choke, made sure the water cooling holes were submerged, and pulled one last time. The engine roared to life. It was monstrous (turns out we left the high idle control up very high)! The engine was a force of nature, and I (like always) run the other direction, expecting this thing to explode. My friend turns the high idle knob back down to something normal (off) and we just stood there, cheering and astounded that this boat we paid $400 for is not only running, but it's running really, really well. It was great smelling two-stroke exhaust again. Here's a video of it purring away:

So that's it. Sometimes, if you look hard enough, one persons yard junk can not only become yours, but also become one of your treasures and a fun new project to enjoy.